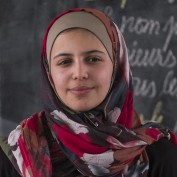 United Kingdom
MUZOON ALMELLEHAN BIOGRAPHY Muzoon Almellehan, 23, is a Syrian refugee and education activist. Muzoon has been campaigning for children’s education in emergencies since she was forced to flee Syria in 2013 with her family. Muzoon started her campaign in Jordan, where she was living as a refugee in camps for three years, including 18 months in Za’atari. As part of a UNICEF-supported back-to-school campaign, she first advocated for more girls to go to school in August 2013 and went from tent to tent speaking with parents of children who were at risk of child marriage or early labor. Over the next two and a half years she became synonymous with standing up for the rights of children, particularly girls, to stay in or go back to school. Muzoon is currently studying in Newcastle, United Kingdom, where she has been resettled with her family. She is the first UNICEF Goodwill Ambassador who is a refugee and offers a powerful, credible, authentic voice on education in emergencies. In April 2019, Muzoon travelled to Mali with UNICEF to raise awareness of the impact of the rising insecurity and violence on children’s education and safety. In July 2019, Muzoon was the keynote speaker representing the voices of children at the UN event for the 30th Anniversary of the Convention on the Rights of the Child. Muzoon has received the following awards and honors: Dresden Peace Prize 2020, Cle de Peau Power of Radiance award 2019, BBC’s list of 100 influential and inspirational women in 2017, TIME’s 30 Most Influential Teens of 2017, Teen Vogue’s 21 Under 21 Class of 2017 and a 2017 Glamour Women of the Year Award. In 2019 Muzoon was awarded an Honorary Doctor of Laws from Glasgow Caledonian University. Aug 2021